Last summer, “helping” a relative search for a classic Cadillac, my husband Brian found a 1993 Allante for sale nearby. He arranged to inspect it and asked me to come along. I brought a lot of reading material. These things take time. But when we got there, Brian cajoled me into getting out and checking out the Allante, too.

Although I’m not usually a fan of red cars, the Allante’s pearl red paint sparkled even on a rainy day. We both looked it over carefully and thought the car seemed to be in great original condition. Though it was obviously somewhat painful for him because it was raining, the owner let us both test-drive it. I remembered reading about Allantes when they first came out and wishing I could afford one. I suggested to Brian that, if our relative chose another car, we should buy the Allante. It wasn’t long before the Allante was in its new home in our garage.

We have enjoyed our membership in the Cadillac – LaSalle Club, having been to 3 Grand Nationals and taken a Club driving tour in Brian’s 1967 DeVille convertible. Brian signed us up for the Allante-XLR chapter, too.

Not long after we bought our Allante, our friend Mary Jane Sanchez posted pictures on Facebook of her “new” car, a red 1988 Allante. She, too, had wanted one since they had come out. While shopping for a used car for her college-student son, she found the Allante and made it her daily driver. We told her about the club and soon, we were both signed up for the club’s fall color drive in Wisconsin’s Kettle Moraine.

As the kids say, I was “sorry, not sorry” that Brian was going to be out of town the weekend of the drive. I hadn’t driven the Allante much since we got it and I looked forward to spending the whole day putting it through its paces in the beautiful Kettle Moraine.

The first challenge was finding the keys. Although I knew where Brian had kept the keys, he had changed the spot without mentioning it. After a frantic search, I found them, but now I had a new problem. Which identical Cadillac key case had the right set? I found the correct era keys, uncovered the car, jumped in and fired it up. I was now going to be late, so I left a message for the drive organizer, Chapter Treasurer Neil Jefferson, and then called Mary Jane, so she could relay the message if she arrived first. It turned out that Mary Jane was running a little late, too. We decided to head directly to the first destination point, Old World Wisconsin, which was closer to our city, Waukesha, than the designated meeting spot in Elkhorn. We met up in Mukwonago and proudly drove our Allantes down country highway LO to Old World Wisconsin. Although not part of the official drive, the beautiful fall colors along the way made it a worthy beginning for the tour.

Mary Jane and I parked up front in the Old World Wisconsin lot. 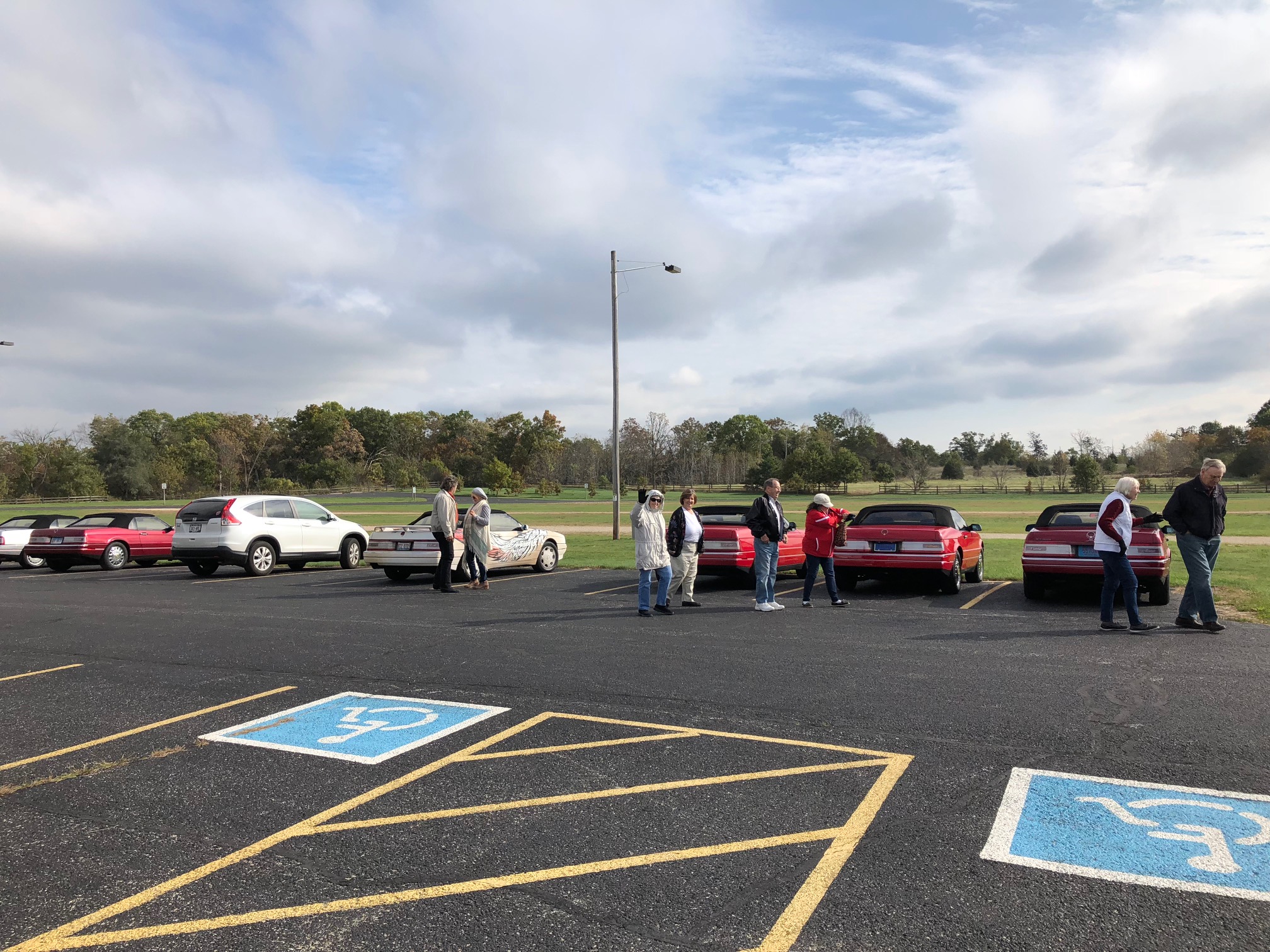 The lot has changed, well, a lot. It used to be shady, filled with tall pines, but a tornado in June, 2010, knocked down a large number of trees and damaged a few buildings. Now, the lot is treeless, so we saw right away when four more Allantes rolled in. I recognized one that I had seen it in the modified division at the 2018 CLC Grand National in San Marcos, TX, and owned by Chapter Assistant Director Walter Bochenek.

Mary Jane and I were greeted warmly by the other club members. Neil gave us maps and driving directions, and then we all headed in together to tour Old World Wisconsin.

Old World Wisconsin is an outdoor museum with 60 historic buildings showing different eras in Wisconsin history. Trams transport visitors to a variety of ethnic farmsteads, where you can see different farming, living, and construction styles. Costumed volunteer workers perform farm chores appropriate for each farm and era. In the Crossroads Village, you can make a purchase in the general store, watch the blacksmith work, buy a Wisconsin soda, and tour the homes, church and city hall. 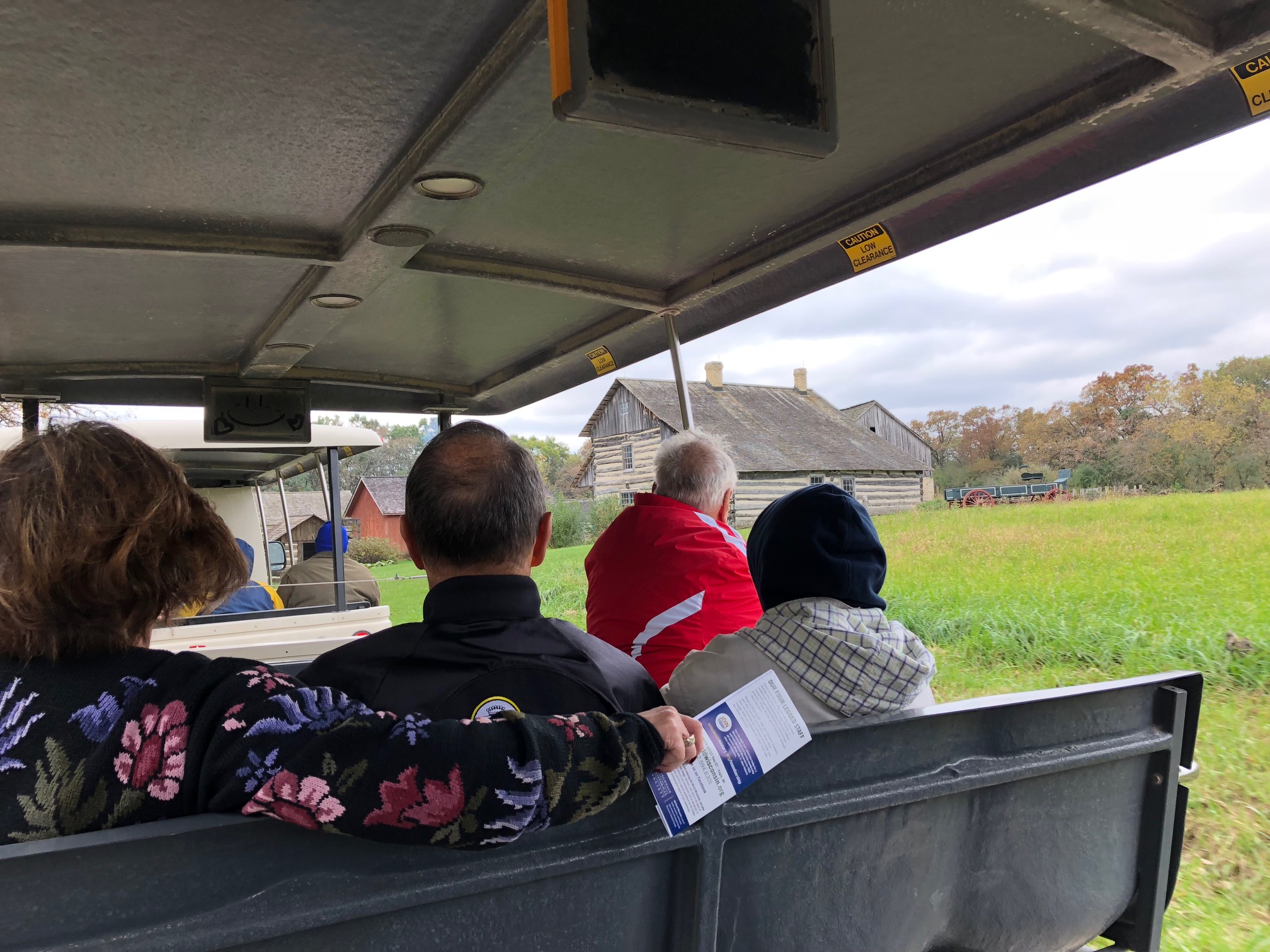 Old World was crowded that day, its last regular day of the season, and our time was short, so club members mostly rode the trams, touring the whole museum. Our driver told us that the volunteers were making old-fashioned “egg coffee” at the Finnish farmstead. Mary Jane and I hopped off the tram, only to find out that the coffee wasn’t ready. Rather than taking the tram back, we enjoyed a closer view of the heritage gardens and farm animals on our walk back

to the Ramsay Barn (the ticket area/museum store), where we joined the other club members (and bought some real coffee) while waiting for a couple who got “lost in history” for a while.

When we returned to our cars, we found some of the museum’s other visitors admiring them, even though they were not the right vintage for Old World’s exhibits. Chapter Director Carl Rieken took the lead, taking the group on a beautiful drive through Wisconsin’s beautiful Kettle Moraine, past farms and woods painted in fall colors, past beer barons’ mansions on the lake in Oconomowoc, and finally on to our next destination, the Wisconsin Automotive Museum in Hartford.

Once we got into the museum, a docent tried to lead us to a seating area so we could all watch a video about Kissels, which were manufactured in Hartford. The poor docent was frustrated when a big, beautiful 1947 Cadillac stopped us all in our tracks on the way. 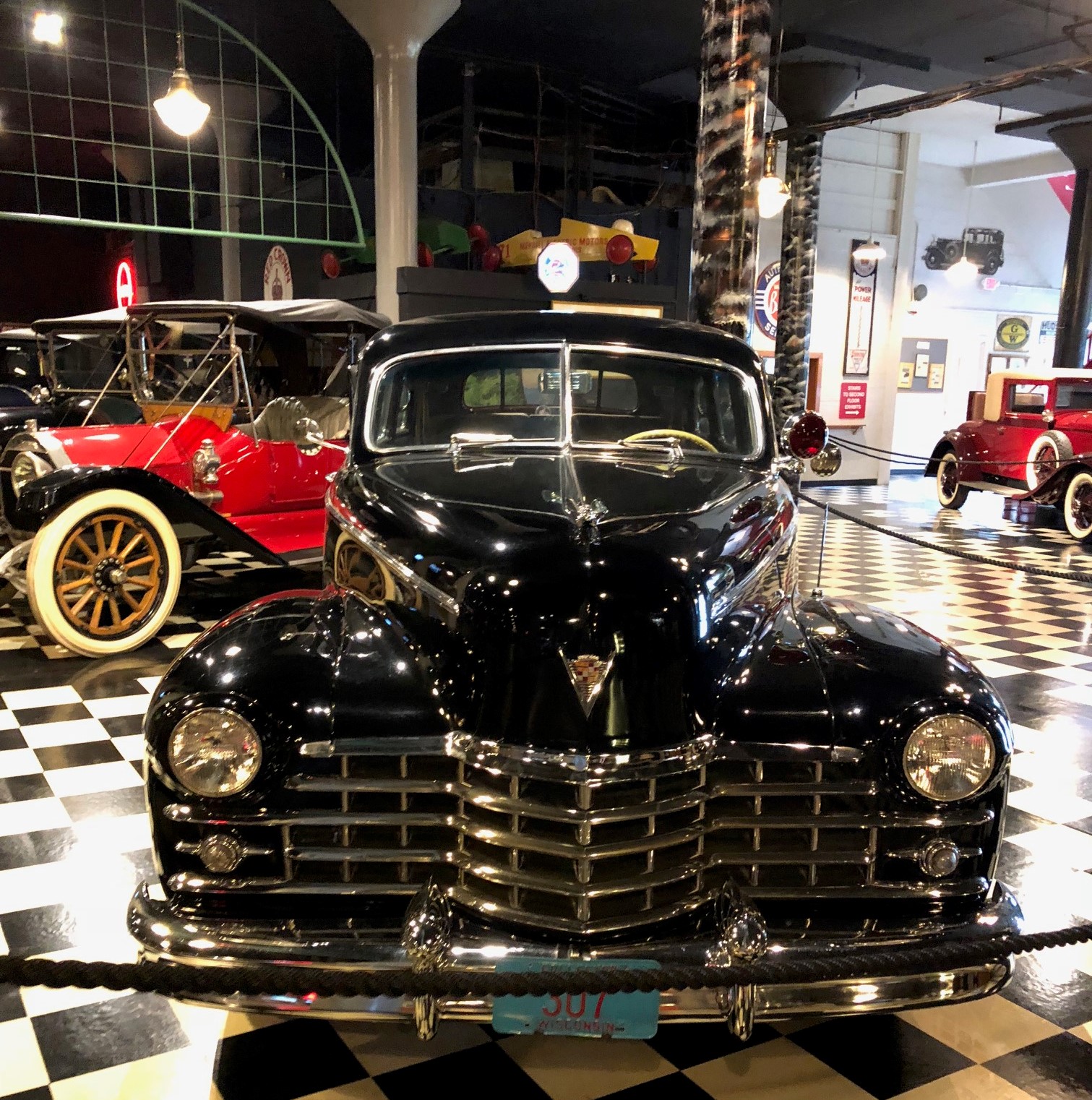 After admiring the Cadillac for a while, we watched the video, learning all about Kissels. We then explored the museum on our own for about an hour, enjoying the variety of cars and trucks on display (my favorites included a 1914 Cadillac and Kissels with dual golf bag holders), the racing history  section, and the steam locomotive exhibit. 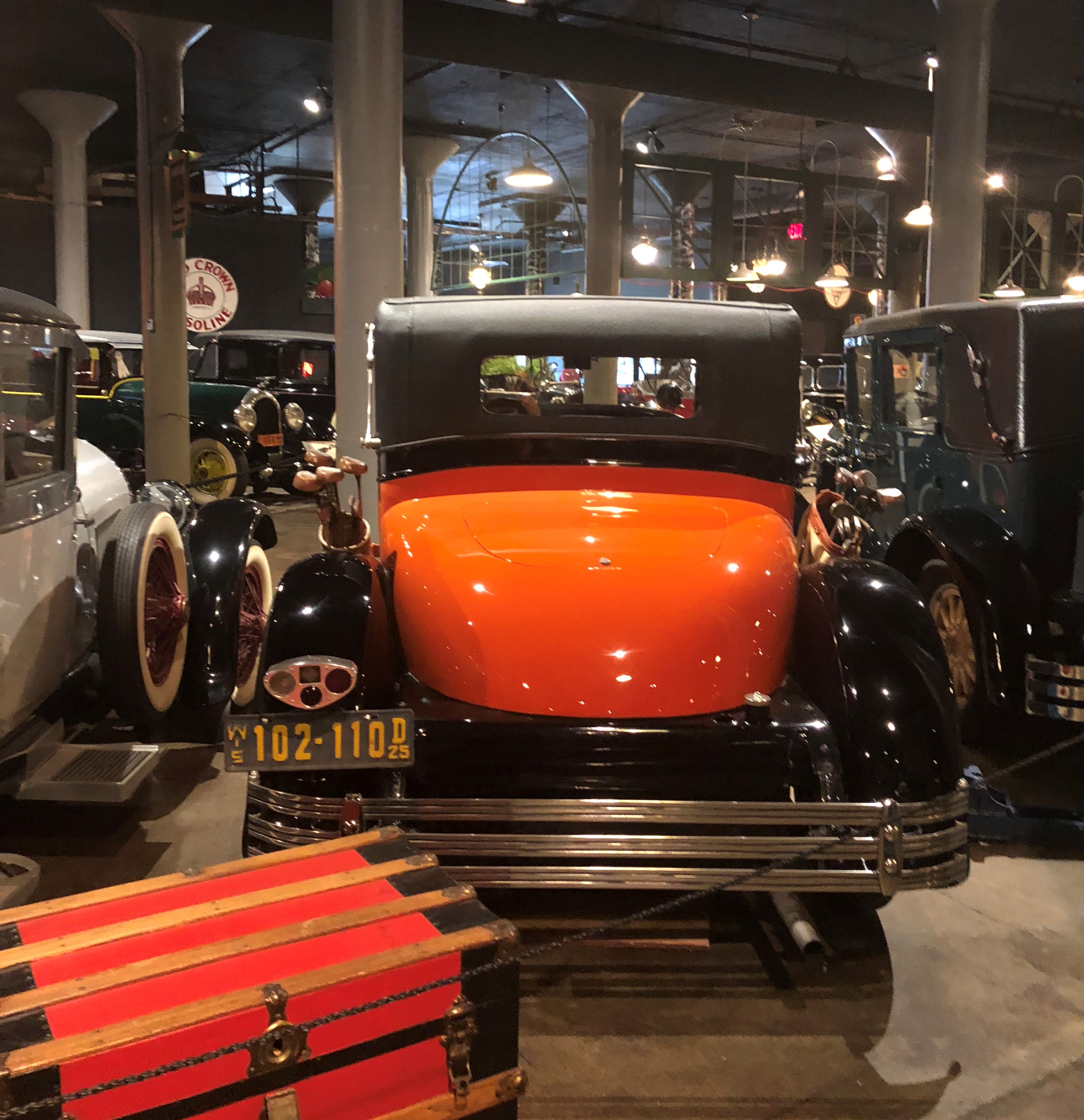 We regrouped in the parking lot and Carl again led the way as we drove through the fall foliage towards Holy Hill, a beautiful basilica built on the tallest hill in the area, offering amazing views of the surrounding countryside.

We tried to stop at the Holy Hill site but it was too crowded. While some people might say the Holy Hill art fair was the reason it was so crowded, we were pretty sure that the visitors were there to see the line of six beautiful Allantes! After all, they all stopped and stared as we drove through.

Our final stop was the historic Fox and Hounds restaurant in Hubertus, WI, where we got to know each other better over hearty, delicious dinners. 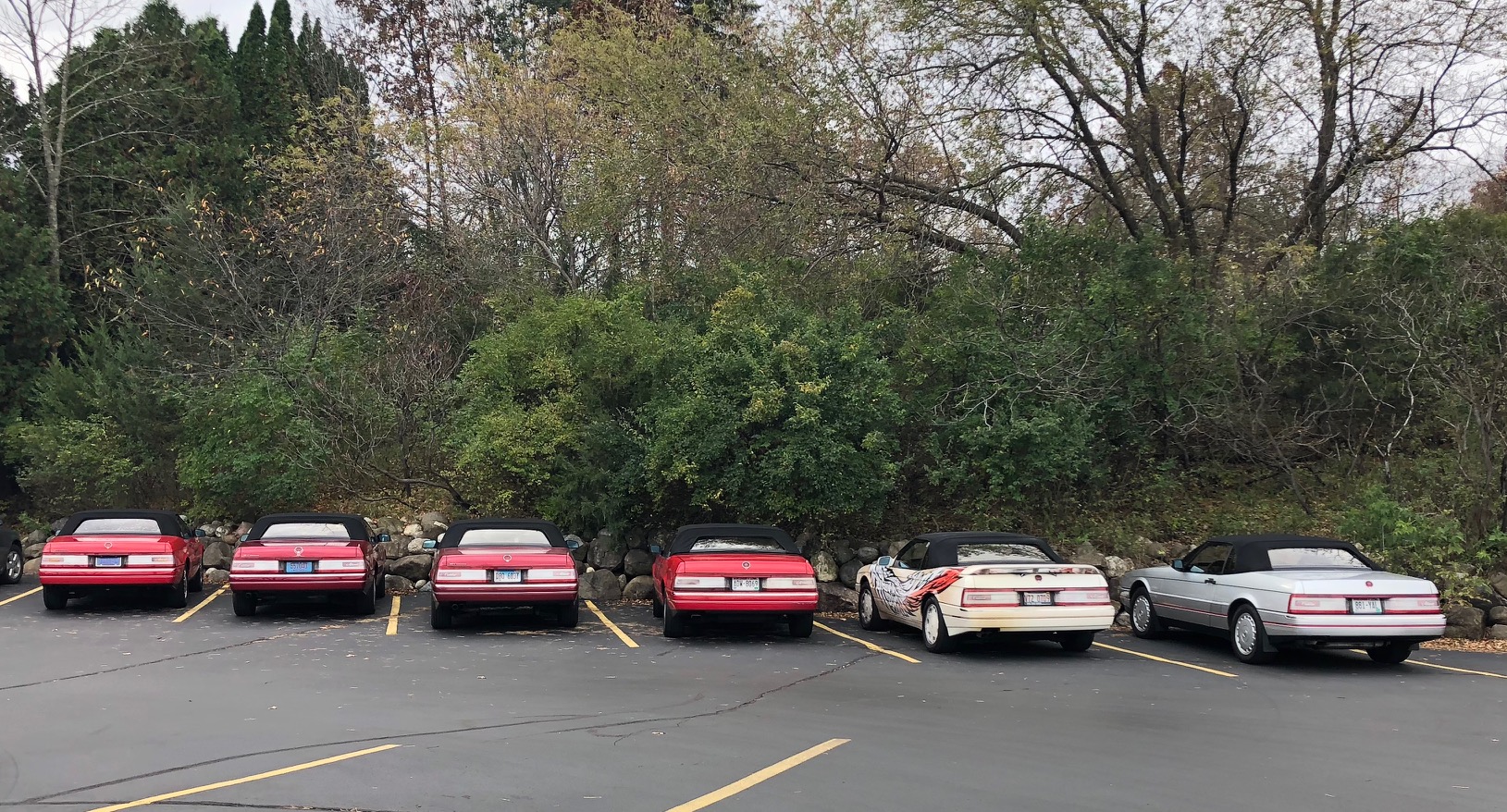 Walter explained a Christmas tradition of his home town, Krakow Poland, of building and displaying miniature churches, a tradition which is also continued in Chicago, where he and fellow Chapter member Barbara Gasior now live. Walter and Barbara had purchased a variety of Polish cakes and pastries which they brought and generously shared after we finished our dinners.

I had a great time on the fall color drive. Although it was too cold to drop the tops on our Allantes, the fall colors were stunning and made our gorgeous cars look even better. Mary Jane and I also had fun a few weeks later when, attending a luncheon meeting of a local professional women’s group, we were able to brag about our hot cars on our cool driving tour!

You can download and print this article in PDF